Groover aims at helping artists get their music heard. Through an innovative web platform, Groover connects artists who want to promote their music with the best curators, radios and labels seeking emerging talents. On Groover, artists can send their music directly to a selection of media, radios and labels of their choice, get feedback guaranteed, and coverage!

gigmit: Hi Dorian, who is Groover and what is your vision in supporting musicians?

Dorian Perron: We’ve met – Romain, Rafaël, Jonas and myself – in California at the end of 2017. Jonas and Romain had released EPs and struggled to get them heard, while I was managing the indie music blog Indeflagration since 2013 and I was receiving hundreds of emails every day from artists who wanted us to write about their music. And I regretfully couldn’t possibly find the time to even read all those emails…

We had realized that artists needed help to stand out from the crowd when 40,000 new tracks are released every day on Spotify. We called more than 200 musicians and music pros and we understood that the issue came mainly from the promotion side, of what happens after the track is created, recorded, mixed/mastered. The barriers to production and distribution were already down thanks to production software, streaming platforms and digital distributors. That’s why we created Groover when we came back to France. Our goal from the start was to help artists emerge through influential channels such as blogs, radios, playlists curators, starting with guaranteeing that their music would be listened to and that they’d get feedback on it. To end those messages in bottles with no answers and break this wall of the first listen.

And of course, we want to maximize their chances of getting positive responses, sharings, signatures proposals, concrete opportunities etc. To this end, we try to guide the artists to the relevant curators & pros for them through our filtering & tagging system and the first version of our recommendation system. Also, we will soon be launching Groover Obsessions, our artist accelerator aimed at highlighting and helping on an operational level fourteen artists – for now – spotted on Groover, with the goal to develop their careers and their high potential.

To sum it up, our mission at Groover is simple: empowering artists to get their music heard and accelerating their careers.

What does digitalization mean to you?

Digitalization for me means “breaking down barriers“: spatial AND temporal barriers.

It has a negative side since it’s shaking established business models and industries which worked in a different way. But I mostly see it as a big opportunity. Digitalization in music represents the possibility for artists to reach much larger audiences thanks to social media, streaming platforms, and also the opportunity for music addicts and curators to have access to more music and talented artists. It’s easier today for artists to reach music industry professionals, even without contacts, and for the latter to discover new music. Groover is the perfect example!

Obviously, human contact remains essential, especially in the music sector. But we see at the moment, especially with the current situation, that developing actions online helps musicians keep their project going, alive. Still, we can’t wait for the concerts to come back!

How does Groover work in detail?

Simple! Groover is a web platform on which musicians and their representatives can directly and simply send their track to a selection of blogs, radio stations, playlisters, record labels, music pros of their choice for 2 Grooviz by influencer (1 Grooviz = approx. €1). You are guaranteed that your music is going to be listened to and to get written feedback on it from the contacts you have chosen in a list of 900+ currently active ones within 7 days… or you get Grooviz back to contact other influencers!

On their side, the influencers – renowned media outlets, radios, playlisters such as Electro Posé, Radio NEO, journalists at Rolling Stone, Tsugi Radio, BIRP.fm, niche blogs, indie record labels, engaging third party playlists – are free to decide whether they want to share your track or not, so they keep their complete editorial independence. The average number of contacts per campaign on Groover is about 25-30 (i.e. 50-60€ invested on a campaign). We recommend this article we wrote about the ideal promotion budget for the Groover Blog.

Guarantees are always tricky in the music business, where it’s also a lot about personal taste!

In 2 years, more than 500k pieces of feedback were given to 20k+ musicians, with an answer rate around 85-90% and an approval rate of around 20%. This means that, on average, if you send your track to 60 contacts, you’re going to get 52 responses in 7 days, including 10 approvals (playlist adds, articles, social media shares, radio broadcasts, meeting proposals etc.) and get Grooviz back to contact 8 new curators & pros.

With this system, artists and their representatives finally get guaranteed answers from the curators and pros they contact for an affordable budget.

Above all, most importantly, great opportunities & encounters arise from Groover! Around 100,000 shares have taken place since the beginning of Groover and more than 100 signatures with label, publishing, touring companies, managers

What is the special offer to the gigmit community?

gigmit users can now enjoy a 10% discount! Sign up on Groover and use the code GIGMITGROOVERVIP (More explanations on how to apply the special discount here).

How are you affected by the pandemic?

The pandemic has had a positive effect on Groover at first. It’s necessarily linked to the fact that we are a digital platform. We allow all artists who can no longer promote their music in the physical world to do it online.

The pandemic has actually brought us even closer to the artists! For instance, we’ve launched Groover Radio. The Groover team listens to the tracks we receive every day. From indie, pop, rap, electro, more niche music too, we’re really open to a lot of music styles. A good way to get an idea of the music sent on Groover is to listen to our Hot 10, 10 incredible tracks selected among the more than 1,500 sent on the platform each month.

At the same time, since March 2020, we’ve been putting a lot of energy in developing Groover on an international level, especially in Brazil, the United Kingdom, Italy, Canada, Germany and Australia. More than 50% of artists who use Groover on a regular basis now come from outside of France, and more than 70% of the available curators & pros are British, Canadian, Brazilian, Italian etc.

Why is Groover the perfect solution in this situation?

For musicians: In this situation, with the absence of concerts, the best way to get your music in the ears of new people is to promote your music online, especially through blogs, playlists, radios etc. Groover allows artists to contact a large number of music industry professionals who are very influential in the industry and to be guaranteed a response. And we invest a lot of energy and resources to guide artists and their representatives to the right targets for them.

For music industry professionals: Groover makes life easier for curators and music professionals. They receive tracks sent directly from artists who have chosen them in an optimized dashboard. They can listen to the tracks like it’s a playlist, make their decisions easily, track their acceptances and even share them more easily.

In addition to making great discoveries, the curators and professionals are paid for their listening time and their feedback (1 Grooviz = €1 per piece of feedback given) whatever their decision, positive or negative, allowing them to keep their complete editorial independence.

The payment system has the positive effect of making both artists and professionals more responsible, helping the former to select their contacts properly and the latter to take the time to discover them.

Making life easier for music connects gigmit and Groover. What comes next?

We’re especially proud to launch on January 21st Groover Obsessions, our artist accelerator dedicated to boosting the careers of 14 artists who got exceptional results on Groover. You can discover them on our website or on Instagram. 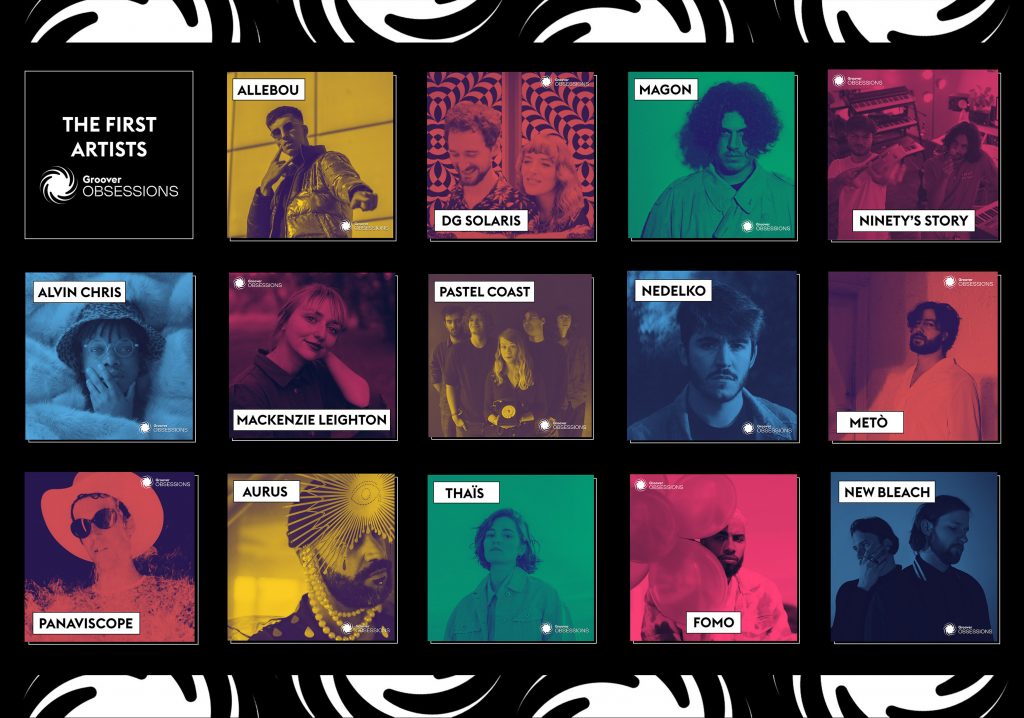 Thank you for the interview, Dorian!

Try Groover now and get an exclusive gigmit discount! Just sign-up on Groover and use the code GIGMITGROOVERVIP (How to apply the special discount?)
Register now on gigmit for free and discover the digital age of booking!