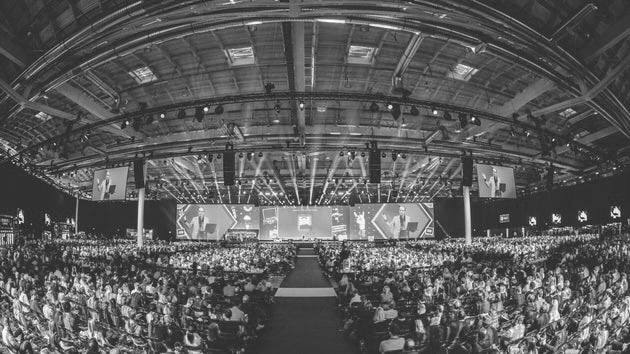 I just spent two days in Hamburg at the OMR Festival, the biggest marketing conference around with about 60,000 visitors. In any case, I will never say the phrase “it’s crowded” at the Reeperbahn Festival again, because I  know now what “crowded” really means. And I know the limit at which marketing becomes completely uncool. And although my head is full of mud because of the thousands of impressions, keynotes, masterclasses, the sheer volume and little daylight, I’m writing a little report on the way back on the train.

“Especially in the beginning, I think it’s important that you don’t just make one video a day for the first time, but rather three. Simply to train the algorithm,” says the famous TikTok influencer, giving her best advice to all TikTok beginners. When asked approximately how long it takes her to make a TikTok video, she responds with, “I always calculate an hour of planning and preparation, an hour of shooting, and an hour of post-production.”

I’ll leave it at that and let you decide if that advice is compatible with what you want in life. Next, I listen to how Hugo Boss made the most successful campaign ever on TikTok with the help of the biggest social media stars in the world and I learnt a lot. For example, that it’s better to buy the influencers and let them do the content than to come up with something yourself that then doesn’t work. “They just know the platform better than you do,” says the man on stage, forgetting that for our budgets we can’t afford Khaby or someone with Kardashian as a last name.

Then, in between, people who have made it self-made: A young mortician who explains his profession on TikTok, someone who can’t even say what she’s actually doing but still has eight million followers, and once vegan recipes.

I’m learning that despite its affinity for music, the platform is not only a mystery for most musicians, but also something that can hardly be implemented in normal everyday life. TikTok requires a completely different mindset for content than any other platform that preceded it, and it also requires more effort and resources for content creation.

Without a young target group, without a real strategy for original TiKTok content, and without too much time, I wouldn’t advise anyone to go to the platform. And even then: gamble.

Probably no buzzword I’ve heard so often these days: “Short Vertical Videos”. At OMR, people are practically laughing when you post photos to a feed. It’s all about short vertical videos. Credit goes to TikTok for forcing YouTube into shorts and Insta into reels. Now we all just shoot 9:16 vertical videos under a minute. There’s not much room for depth of course, but it doesn’t matter because: You can’t get by without Short Vertical Videos these days, even in marketing and social media work for music projects. And I’m serious about that. Those who have a long-term content strategy and have really good content they can play out in these videos and formats, will be far ahead in the race.

In times of extremely short online attention spans, extreme saturation as far as social ads are concerned, and thus also enormously increased marketing prices, people are now thinking a lot about how to get around this. Prime examples are offline marketing campaigns that have such a sharing power that people hack into people’s feeds organically. That makes perfect sense. For these reasons, Netflix buys expensive house walls and has them spray-painted, with the ulterior motive that many people will then share. Or Trivago buys into Chelsea London’s training (!) jersey for millions, because the social media impressions of the players and the club alone are worth many times over.

Nothing new, but with the increasing penetration of QR codes and the fact that offline marketing is left to the left of most, a lot of creativity can go a long way. The calculation: In the end, you pay less per impression than with classic social ads and have the offline reach and storytelling on top of it.

Whoever manages to convey something exciting, clever or interesting beyond the actual music in Short Vertical Videos (or even “normal across” on YouTube, for my sake) may have the grip to make a splash in Insta Reels, YouTube Shorts and especially on TikTok. And I explicitly don’t mean how the new song or album came to be, but something that people are really interested in. See above: The mortician who brings people into his everyday work and thus got Drive on TikTok. Here the problem of most musicians* will be that they can neither talk well about themselves and their work, nor have a real plan of anything else.

To see how the big marketing world ticks, for some really exciting masterclasses and the one or two very clever word contribution, the OMR Festival was well worth it. Sure, way too many people whose top priority is the next lead or the next conversion, the level of commercialization can hardly be topped and I have never experienced so much buzzword bingo bullshit in one bunch. If you want to see the review again in the form of fun photo posts, follow Low Budget High Spirit on Insta.