On the way to gender equality: At gigmit, we are excited to see that a growing number of the festivals we work with are opting for gender-balanced line-ups. But how many female artists are performing at showcase festivals? And how many female speakers are included in music conferences? In order to find out, we did some research and compiled statistics on women in the music business – including our own live networks.

Frightening Facts About Gender Equality In the Music Industry

“Pop culture feels so far ahead but the reality of how a lot of people live every day is way behind that”, says Kate Nash, musician, actor and Keychange Ambassador. To proof that we collected some alarming figures on gender equality in the music industry.

Where Are the Women In the Lineups?

Have you ever taken the time to closely look at a festival poster? Lots of names, some known, some unknown, but mostly male. @bookmorewomen helps you distinguish female headliners by removing all male artists names on festival posters, which paints a clear picture in some cases. Especially considering the fact that the industry’s most in-demand and popular performers right now are women such as Ariana Grande, Beyoncé or Billie Eilish.

As you may know, gigmit has initiated the EU funded INES project together with 8 founding member festivals, which now has grown to a network of 19 European showcase festivals. We think that International Women’s Day is a great opportunity to show you how many women have been represented in the recent programmes of INES showcase festivals. 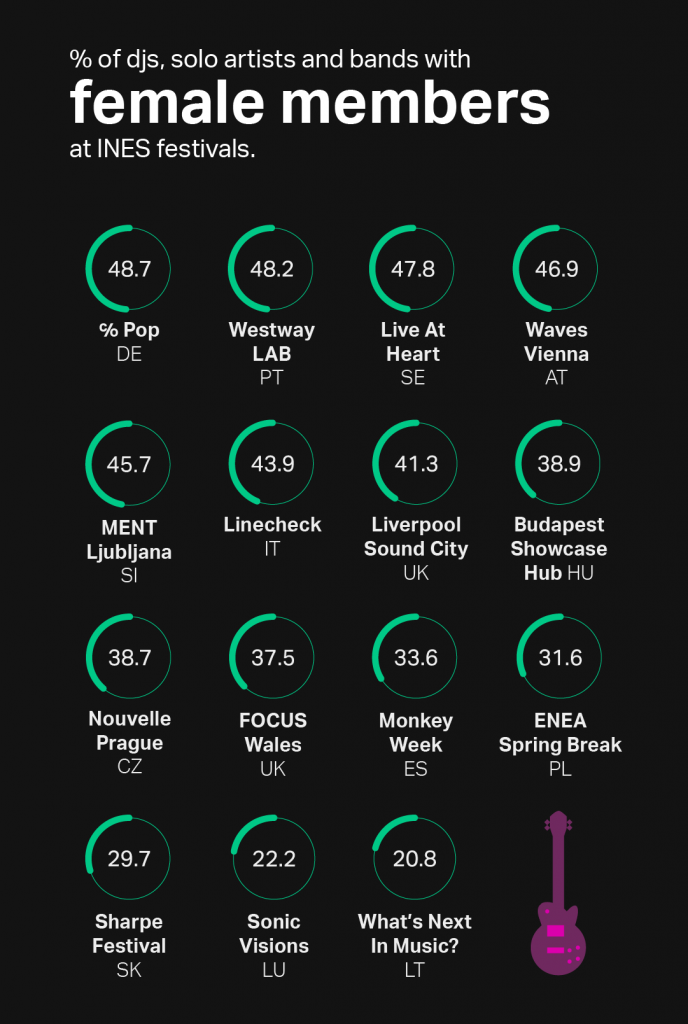 Our charts are based on the last edition of INES festivals from 2019 to 2020.

For the INES#talent 2020 programme, the same showcase festivals and more have selected 134 promising artists from their countries, and this year 45,5% of the talents are female solo artists or bands with female band members, which is more than last year. In 2019, 40,9% of INES#talents were female artists. 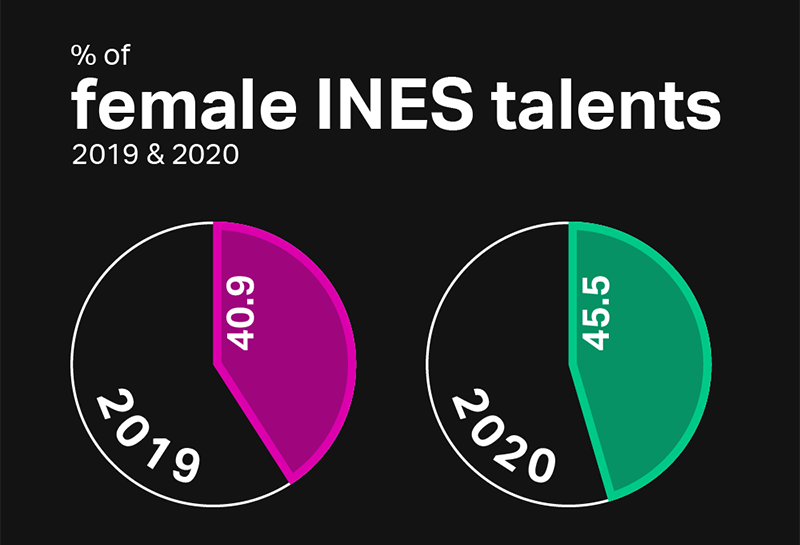 We have also done some research on the industry professional side. Who is booking those artists and is responsible for balancing the lineups? It seems that bookers are also mostly men. Among the INES network, only 4 out of 19 festival bookers are women, that makes 21%.

Moreover, 82% of CEOs of UK music publishing companies are men (2) and to top it all off, there is almost 30% gender pay gap at the three major labels in the UK (4).

The good news is: since Keychange was started, “many of our signatories are already achieving their targets, or have achieved their targets since signing the pledge, including Iceland Airwaves and Mutek Montreal. We’re monitoring the impact over 5 years so we will release more detailed information during Phase 2 of Keychange” says Maxie Gedge, “even if some regions have fewer signatories such as the Balkans, Middle East, North Africa and the US”. According to Keychange, there will be a focus on developing conversations in those regions during phase 2.

Maxie Gedge, Project Manager at PRS Foundation explains that across Keychange’s collection society partners, “on average 17% of members said they are women”.

“Keychange is calling on all music organisations to take responsibility and make change – in all areas of their work. That means in the workforce, in the boardroom, on the stages and more. We’re now collecting data on audience stats and we will be reporting on the progress during phase 2 of Keychange. The challenge is that there’s a standard data collection policy, although we are working on resources” she says.

Music conferences are truly the best places to meet music industry professionals of all types: bookers, A&Rs, managers, festival organisers, new technology start-up founders and so much more. Attending panels and listening to the latest news on the music business is definitely essential both for artists and professionals. Let’s have a look at Liverpool Sound City for instance. The speakers list for 2019 was 66% female. 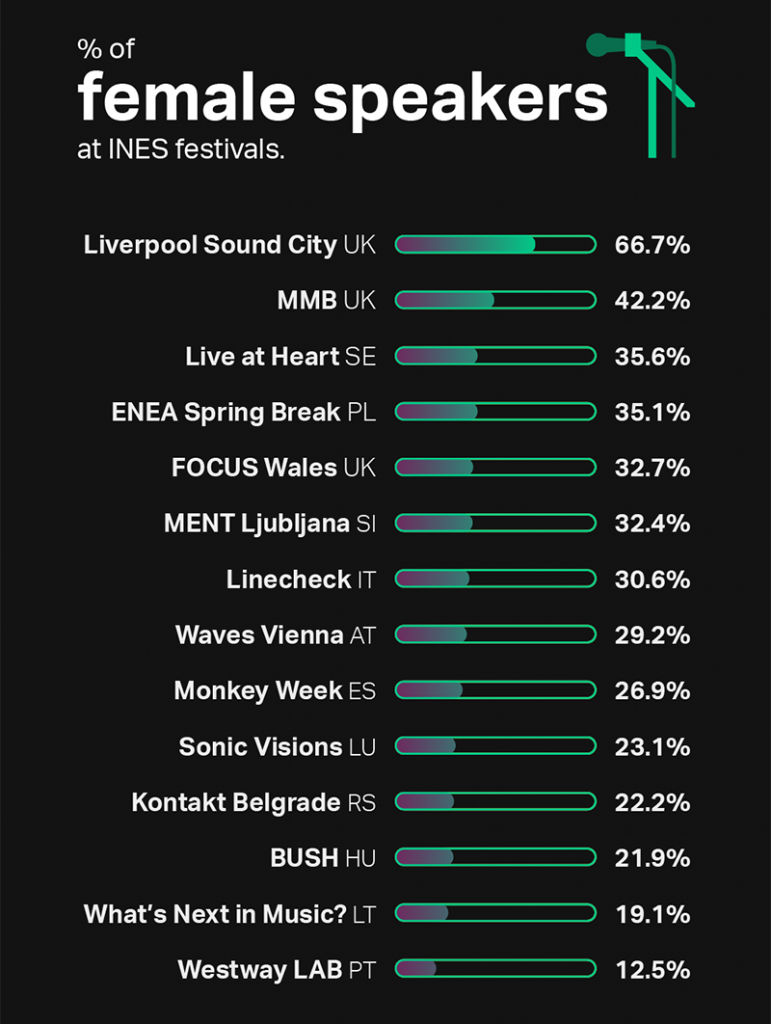 Who Is Not In the Room And Why?

The underrepresentation of women in the music industry has become so noticeable that many conference panels are being held on various topics around the issue of gender imbalance. The challenges for different sectors, regions and genres are very diverse. “If you start with the question who is not in the room and why and the conversation that follows usually helps to specify barriers that people are facing”, says Maxie Gedge from Keychange.

The PRS Foundation Initiative Keychange aims to achieve a 50:50 gender balance in music events by 2022. The international initiative calls on all music organizations to take responsibility and make a difference in all areas of their work: That means in the workforce, in the boardroom, on the stages and more. Anyone who signs the ‘Keychange Pledge’ promises to be serious about achieving gender equality.

Keychange aims to provide women and gender minority participants all the skills and opportunities they need to get to the next stage in their career. To achieve this goal, industry and export experts from 12 countries selected in the Keychange development programme as ‘future leaders’  have selected 74 artists and music industry professionals after an open call (over 650 applications were submitted) who will benefit from help from the initiative. Selected artists include INES#talent 2019 MounQup, Sol Escobar, Joanna Duda, ISÁK and many more…

The good news is: since Keychange was started, “many of our signatories are already achieving their targets, or have achieved their targets since signing the pledge, including Iceland Airwaves and Mutek Montreal. We’re monitoring the impact over 5 years so we will release more detailed information during Phase 2 of Keychange” says Maxie Gedge, “even if some regions have fewer signatories such as the Balkans, Middle East, North Africa and the US”. According to Keychange, there will be a focus on developing conversations in those regions during phase 2.

That being said, 2020 is a new year and many new festivals have joined Keychange to take action. Did you know that already 9 festival members of the INES network are also Keychange members? 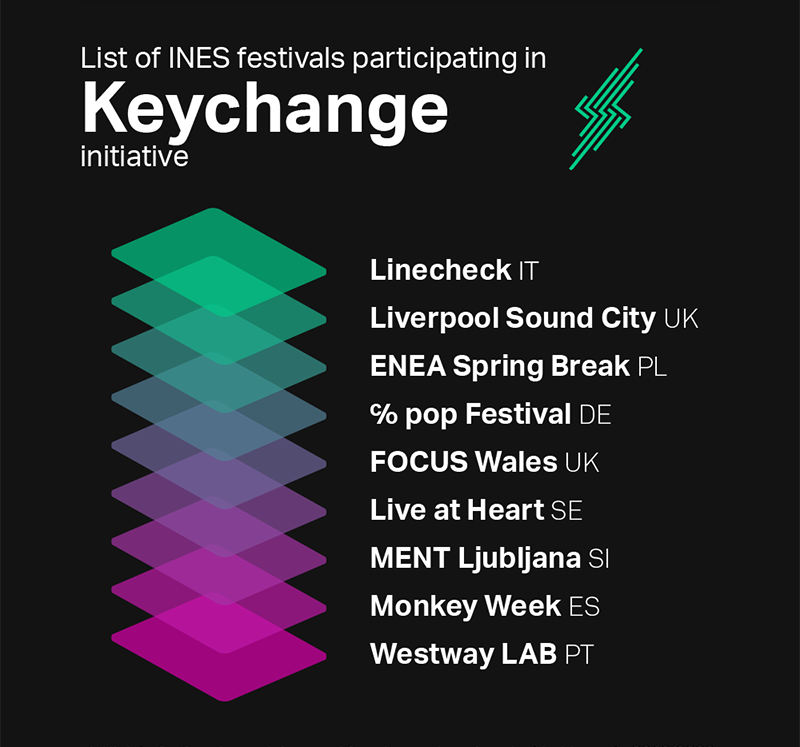 Update: Waves Vienna is also a member of Keychange!

Looking at the open calls on gigmit, there are some Keychange participants among them, such as Bluedot Festival, Valley of Arts Festival or Tallinn Music Week.

Although the music industry sees itself as a place of lived diversity, this is not reflected in its structures yet: female, trans- and non-binary artists have fewer opportunities to perform than men, they earn less and get more difficult jobs in the music industry. This must change! Equality is an essential step on the way to a sustainable music landscape.

Gender equality does not happen in the music industry by itself. However, there are initiatives like Keychange, which are committed to equal opportunities. Positive developments can certainly be observed in promoter networks such as INES. It is, therefore, worthwhile to keep bringing the topic back to the table – until something has changed.

Find out more about Keychange HERE.
HERE you can find all information about the INES programme.
HERE you can download our INES infographic.