gigmit: Hi Andreas, I want a good live sound. Where do I start?

Andreas Juwan: Haha – that’s a big question! Developing a great live sound always starts with the music and the musicians themselves. In physical terms, live sound is nothing more than signal processing. First of all, the signals and their source must be the best possible. The equipment follows. Or as some live engineers out there put it: “Shit in, shit out!” A well-trained and attuned combo with the appropriate suitable equipment is already half the battle:

You studied Music Psychology and Psychoacoustics, are a mechanical engineer, a musician and producer yourself. Who does the best soundcheck?

For a constantly gigging live band, it is, in the best case, always the same person – the one who really enjoys doing live sound! In a perfect world this person is not a performing musician of the band but knows the songs, the show and the individual musicians (and their habits) very well. I’m well aware that this is not always possible, especially if you’re not a professional yet. But then again, it should be the one band member who is really up to take care of the live sound and who has a clue on most of the tasks. It usually helps if the live sound is considered as just one more creative part of the band’s output concept, rather than just being some necessary chore.

When it comes to the available equipment, the opportunities nowadays are nearly endless. Just think of digital mixers and their remote abilities/total recall functions, DSP power, effects, plug-Ins, etc. – there’s tons of accessible stuff out there which can be, by the way, very fun to use if one just digs a little bit deeper into the matter. Man, how I wish I could have accessed stuff like this at the end of the 90s when I started to play live!

Are there standards and sequences you recommend?

Since workflow is a very personal thing, this is not that easy to answer. There are, however, some best practises out there that make sense and which are of course worth to anticipate – in order to just flatten the learning curve. If we consider a standard situation of a band, wholly taking care of their own setup in a small club location, they probably should start off with the stage as the fundament of the whole show. But of course, the more pro it gets, the more the workflow will differ. Last but not least, try to always have enough time to not have to set up under stressful conditions. I know, this is often easier said than done…

What are the basics in operating a mixing console?

After everything’s wired and the instruments and amps are on, power the FOH desk.

One more small hint: the trick of “subtractive EQing” is a very handy one. If “more bass” is desired at a certain signal, try to reduce the lower mids slightly. This often has the same effect and will help you to keep your mixing on track.

What’s the secret of equalization?

Haha, when it comes to EQing you of course need the technical know-how and some certain amount of wizardry. An equalizer is no rocket science, but the complexity grows steadily with the number of signals. Additionally, live and studio applications might differ quite a lot. However, at first: Gather plenty of experience. Tweak. Listen. Tweak. Repeat.

EQing allows us to form the sound of any signal quite precisely, in various special frequency ranges. With a band, you have to mix various different signals. In the very most cases simple amplification, adjusting the levels and setting the panorama would not be sufficient for creating a great live sound. So utilizing EQs comes in handy: any frequency range can be optimized in a way that the typical sound character of any processed signal or instrument stand out in the mix. Did I already mention being a big fan of subtractive EQing?

What do I need to know about effects?

Compression is reducing the dynamic range of a sound/signal by reducing the differences between louder and softer passages. So anywhere a highly dynamic signal is current (its big differences in levels or loudness could cause problems), the cautious application of compression is recommended. The most common signals amongst others are vocals, kick drums and highly dynamic acoustic instruments. Again: the more experience you have, the better you will know where and how signals need to be compressed.

Reverberation applies in nearly every live sound. It is a natural phenomenon occurring whenever sound collides with a surface such as walls, ceilings or floors, after which it is reflected. With artificial reverberation, you can influence the impression of room sizes, which helps to make your mix more “airy”. Any single sound to which reverb is added is then transporting more information in terms of depth and width to the listener’s ears. To start off, try to play around by adding just one or very few different room sizes on instruments or instrument groups. You will be stunned how big the impact on the “transparency” of your mix can be. Further, try to apply excessive amounts of reverb in order to see how this will give a rather “washy” effect to your mix. You’ll notice how you’ll quickly develop your own workflow, which will help you in any live situation to create a quick basic mix anywhere. This will help you immensely to be able to adapt any given circumstance in any given location.

If I can’t hear myself on stage the performance usually doesn’t work either. What is the key to good stage sound?

Last but not least, you have to feel comfortable being on stage. This is always immediately recognized by your audience.

Why does my music sound great during the soundcheck but then doesn’t sound as good during my actual gig?

That is truly one of the most frequently asked questions out there. Mixing a great live sound is a very dynamic process, which constantly requires small adaptations. Just a soundcheck is never enough! Nearly every one of us has already experienced this in gigging small to midsize locations. This phenomenon is based on rather simple, or let’s say obvious, physical principles. With a bit of experience and preparation, these can be handled quite easily.

Once the location gets stuffed with people the noise floor level will rise quite drastically. The “signal-to-noise-ratio” will decrease and certain frequencies will become masked – noise is masking sound and vice versa – as both are physically there but the respective levels will have changed compared to the situation while sound-checking. Due to the location being filled with people also the whole behaviour of reflections (remember the theory of reverberation!) is changing, which will also further affect our live mix. Good news is – knowing the above, we can quite easily cure these issues, given that we have brought “enough rig for the gig”.

When does a PA make sense at all? Especially when it comes to up-and-coming artists less can be more. If there are only 50 people in front of a small stage anyway – aren’t the amps of the musicians sometimes enough?

It is heavily dependent on the genre and the lineup whether “unplugged” can work out fine or not. Imagine an orchestra that always has a very distinct positioning of the different registers and instruments on stage, with the objective to have the best possible “mix” reaching the audience. But with our amplified, 4-piece rock band, we simply won’t have the spatial opportunity to arrange the stage like this. 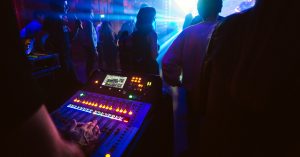 Personally, I’ve always been keen on using a PA system quite early on for FOH sound and being as disciplined as possible on the “loud” stage. Guitar amps or drummers are quickly even too loud for many gigs. In most of the cases without a “full band” PA, the sound for the concert-goers varies very much depending on their position in the room. If the left guitar dries my hair from the stage down I won’t be able to hear the right one. If my position is fairly close to the drum set I will have a hard time hearing anything else, and so forth. The louder the band, the worse it gets. If you manage to lower the levels on stage as much as possible and mix all necessary signals into the PA system, it will create a way more homogenous output for your audience, which will result in you or your band sounding “more professional”. The more silent the band or the genre, the more likely a live set without a PA would work.

I want to sound as great in the rehearsal room as on stage. How do I adapt my live sound? Is that even possible?

As long as there are rehearsal rooms musicians will ask this question. Especially because most rehearsal rooms are “acoustically suboptimal”. What matters the most is getting as much as possible and trying out many different setups. Nonetheless, up to now, there are plenty of possibilities out there that will help you get your rehearsal situation sound as close as possible to a real “live experience”.

Andreas, thanks for the tricks!

It was my pleasure! Hopefully, I could offer some inspiration. YAMAHA provides a great online guide for beginners on PA setup, equipment and sound-shaping for bands, small groups, meetings and DJ parties. It’s really worth having a look!

Find out more about the basics of great live sound at YAMAHA.
To bring your sound on stage join the gigmit community and find your next gig.